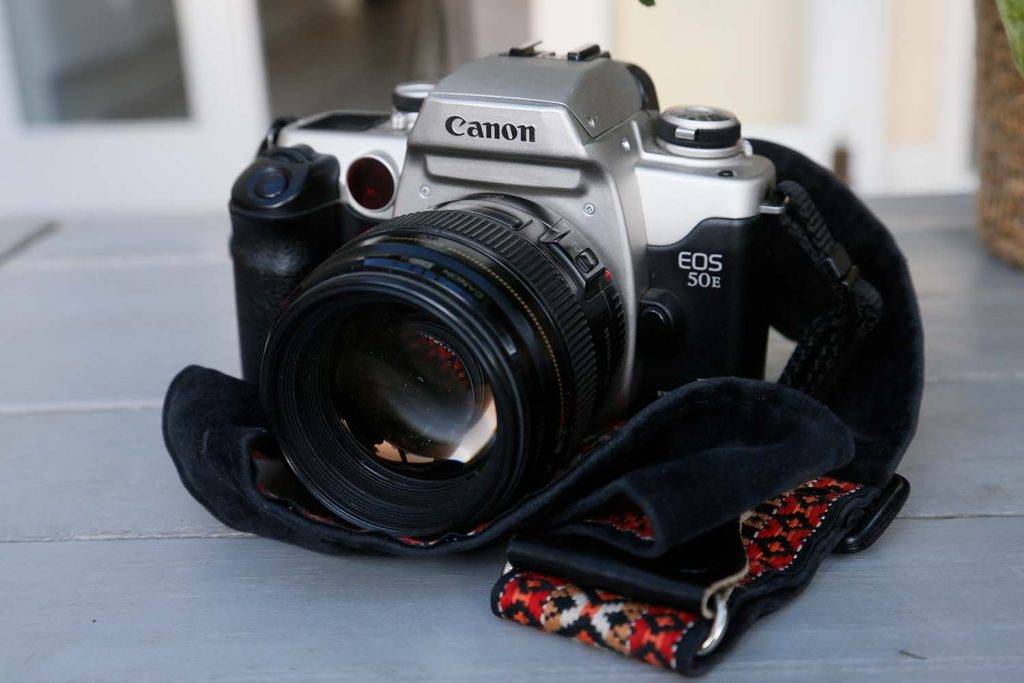 Can you buy a usable, reliable camera for the price of three rolls of film?

90’s film SLR’s are an anomaly in the brave new world of digital era film photography. They are the pinnacle of the film SLR design, highly specified and easy to use, with ergonomics that persist through to the latest generation of mirrorless cameras. Yet their prices remain firmly low, especially mid and lower range models. I picked up my near mint 50E for the princely sum of £25, so these are a very cheap film camera. For not much more than the price of a disposable camera you get an SLR capable of making professional quality images in most situations you can think of.

If we compare the Eos 50E to the AE-1 Program Canon’s similar level predecessor it beats it in every technical category.

I could go on, but you get the idea. The mid range EOS cameras beat their FD mount predecessors in every technical department, but you will pay £150-£200 for good AE-1 Program or similar. The 90’s AF cameras just don’t have the looks or match the experience of a ‘classic’ manual film camera. For this reason they generally sell for much less. The downsides are the batteries are relatively expensive and the camera does not work at all without them. You are also unlikely to find someone who will repair them. However, at such low prices you can buy a couple of spare bodies and still not pay as much as you would for one AE-1.

In terms of ergonomics, using a EOS 50E is very much like using any modern Canon DSLR. The controls are in the same place, the metering modes are very similar, and the viewfinder shows the same information. It certainly doesn’t feel like a cheap film camera in the hand. Modern EF glass will work perfectly with the older EOS film cameras, and as far as I can tell the flashes do too. The only real operational difference is the 50E has to more modern EOS cameras is that the program, metering, focus and motor drive modes controlled by two large dials on the top plate instead of the more usual small buttons. I actually prefer this, the important controls are all easily accessible on the top plate, and quick to adjust.

In actual use I would describe the EOS 50E as a great camera but perhaps difficult to fall in love with. Undoubtably, All EOS cameras are excellent in terms of results. You insert a roll of film, shoot away and in the most part you will get in focus, well exposed images. Perhaps what they lack is the retro experience of older cameras. As industrial objects they aren’t as nice as their predecessors. Plastic has taken over from black leatherette and chrome and every operation seems to be preceded or followed by a metallic whirr. I personally found the motor in the body quite loud and unrefined. This is not a camera I would be comfortable using in a quiet environment.

Ultimately, despite all of the positives of the Canon EOS 50E, it is not a camera I expect many would display in a cabinet. But if you want to get excellent results at a bargain price, look no further.

The overwhelming benefit of later film SLR’s is that they are largely compatible with modern DLSR systems of the same brand. So if you already have a full frame Canon DSLR, all your lenses and accessories will be compatible with your film camera. This is a big deal. If you have ever tried to find a decent fast prime for a manual focus film camera, you’ll know that it is often a difficult and expensive task. I have 7 lenses for my EOS system. Covering 17mm to 200mm in three zooms and a selection of fast primes. They all work perfectly on my EOS 50E. So I have a ready-made system without hunting around Ebay for months.

The EF mount is also very well served by lens mount adapters. So if you want to use vintage glass on a modern film EOS body, you can couple old glass on a more reliable modern(ish) body.

The Canon 50E is lightweight feels good in the hand, and undoubtably does everything you need it to. The only drawback is the chrome detailing which makes it a bit more visible. Personally ,I think the shutter is quite loud, but that is to be expected with a motorised camera.

The Canon EOS 50E like most cameras of its era, is a cheap way of getting into film photography if you already have some Canon EF lenses. If you want to dip your toe into the waters of analogue photography there is probably no cheaper way of doing it that will get you the same results. The only expensive thing is the large lithium battery. If it is working properly, it will be a joy to use.

Personally I would recommend a mid range AF film camera of whatever brand over a compact camera. Compact cameras are becoming increasingly costly, are not as well built, and produce inferior results. I certainly would not pay a big financial premium just so I could put my camera in my pocket!

It is relatively easy to find low and mid range EOS cameras in good condition. They often have had very light use, holidays and family gatherings most likely. Finding a pro level camera in nice condition is much more difficult. So often with higher specified cameras you are paying a premium for something that may be vey well used. It’s true that a 50E or similar will not have you film shooting friends drooling over it – but if the results speak for themselves, who cares? Ultimately, it’s the quality of the output that really counts.