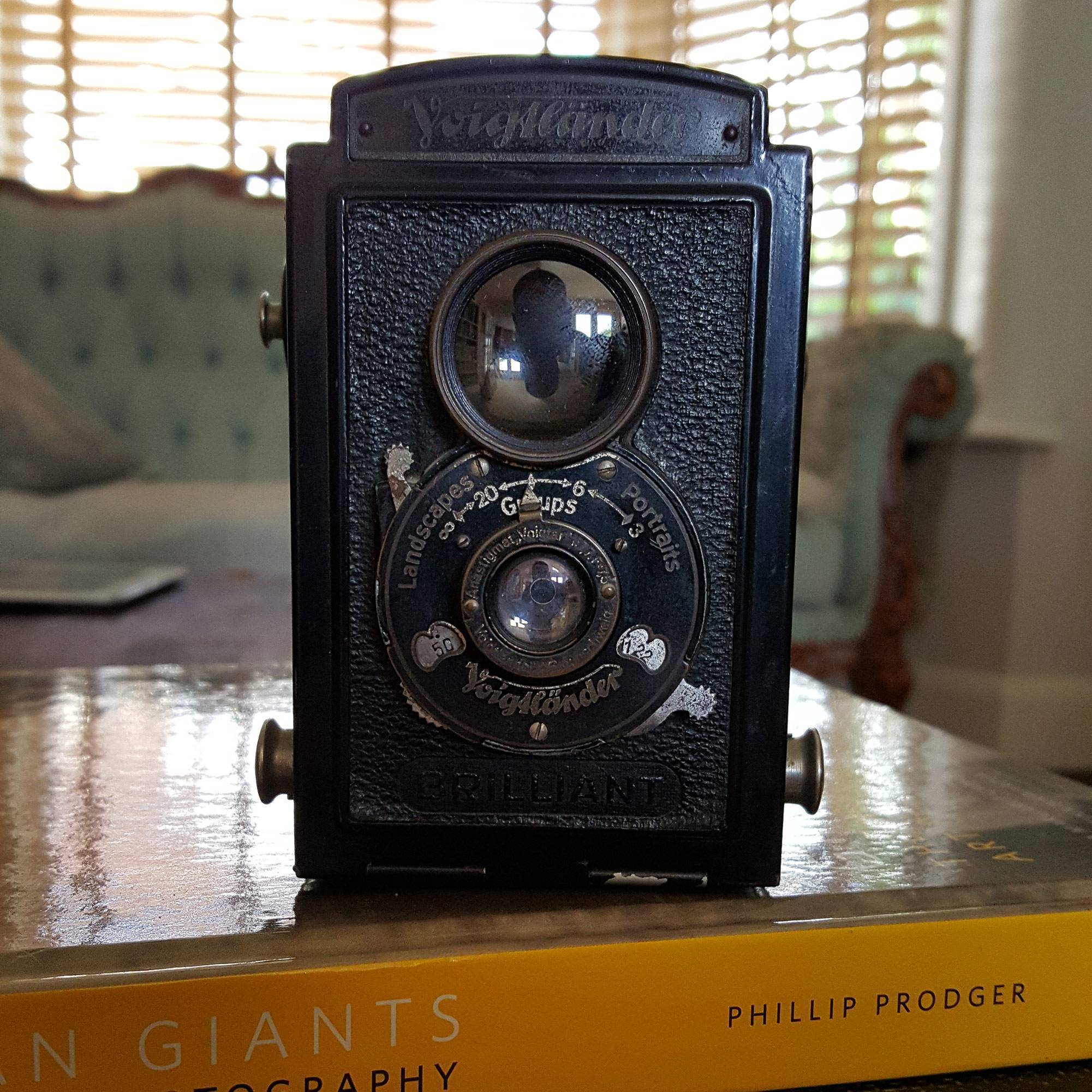 Although it looks like a TLR, the Voigtlander Brilliant is actually a box camera with a TLR style viewing system.

The Voigtlander Brilliant was introduced in 1932. It is a cut above than the standard box cameras of the time, but by no means top of the range, even for the 1930’s. Specifications and features are sparse. It has three shutter speeds 1/50, 1/25 and bulb. They are complimented by three f-stops – f7.7, f11 and f22. The lens is an uncoated triplet design without an iris. The f-stops instead are stamped pieces of metal that swing across the lens. This means there are no in between settings, so you are stuck with three apertures two stops apart. There is no meter so you’ll have to use a handheld meter or use a printed out exposure guide. The camera is light at 500g and you could easily carry it around all day.

Focusing is not connected to the TLR finder so the lens is scale focused. There are marks on the lens scale for portraits, groups and landscapes, with a maximum aperture of f7.7. There should be enough depth of field with a slow lens such as this for scale focusing to be accurate enough in most situations. The camera takes 120 film which is readily available today, even though it was introduced over 100 years ago!

I found this camera at a local antique camera dealer for only £20. It is well used but did seem to have any obvious flaws. So for little more than the cost of a disposible camera I thought it was worth giving it a go. What I was hoping for was a camera that would serve as a better made Holga substitute. I wanted a funky lens but without any of the less controllable aspects of a toy camera, such as light leaks or winding issues.

I wanted to try shooting the Voigtlander Brilliant, but knew I was limited in terms of shutter speeds. If I wanted to use the camera in daylight I’d have to choose a slow film. Otherwise I’d wildly overexpose my film on anything but the gloomiest day. Likewise if you shoot indoors you’ll have to shoot fast film to have any chance of getting usable negatives. There is no flash sync that I can see. I decided to use Ilford FP4 for my first test and to shoot outdoors.

When you open up the camera for the first time there should be an empty 120 spool inside the camera. The film moves through the camera from bottom to top, so put your empty spool at the top of the camera. Next load the film spool into the bottom. 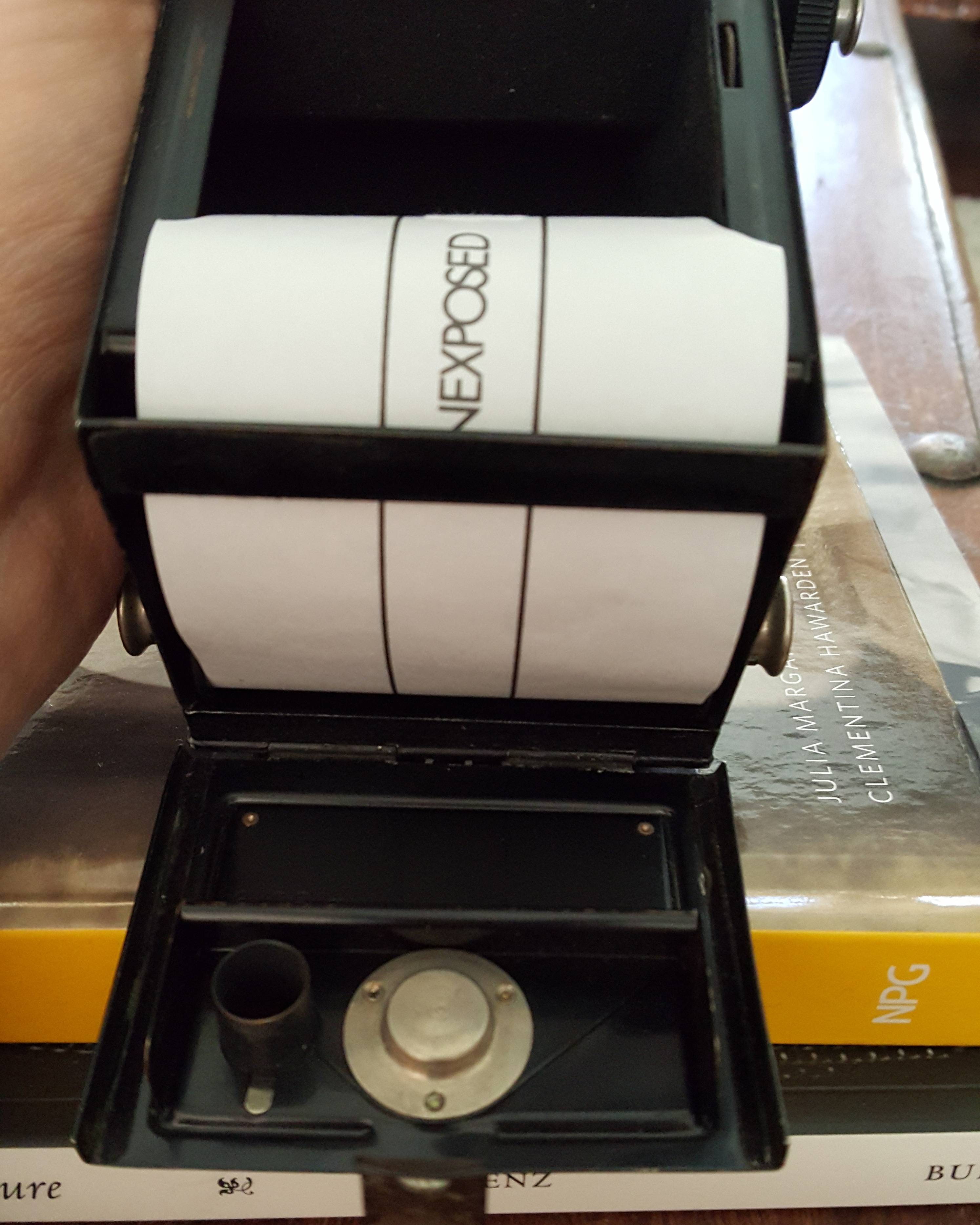 As you can see from the photo, the Brilliant has a light seal on the bottom corner where the two halves of the camera back meet. Make sure you thread the film underneath it. 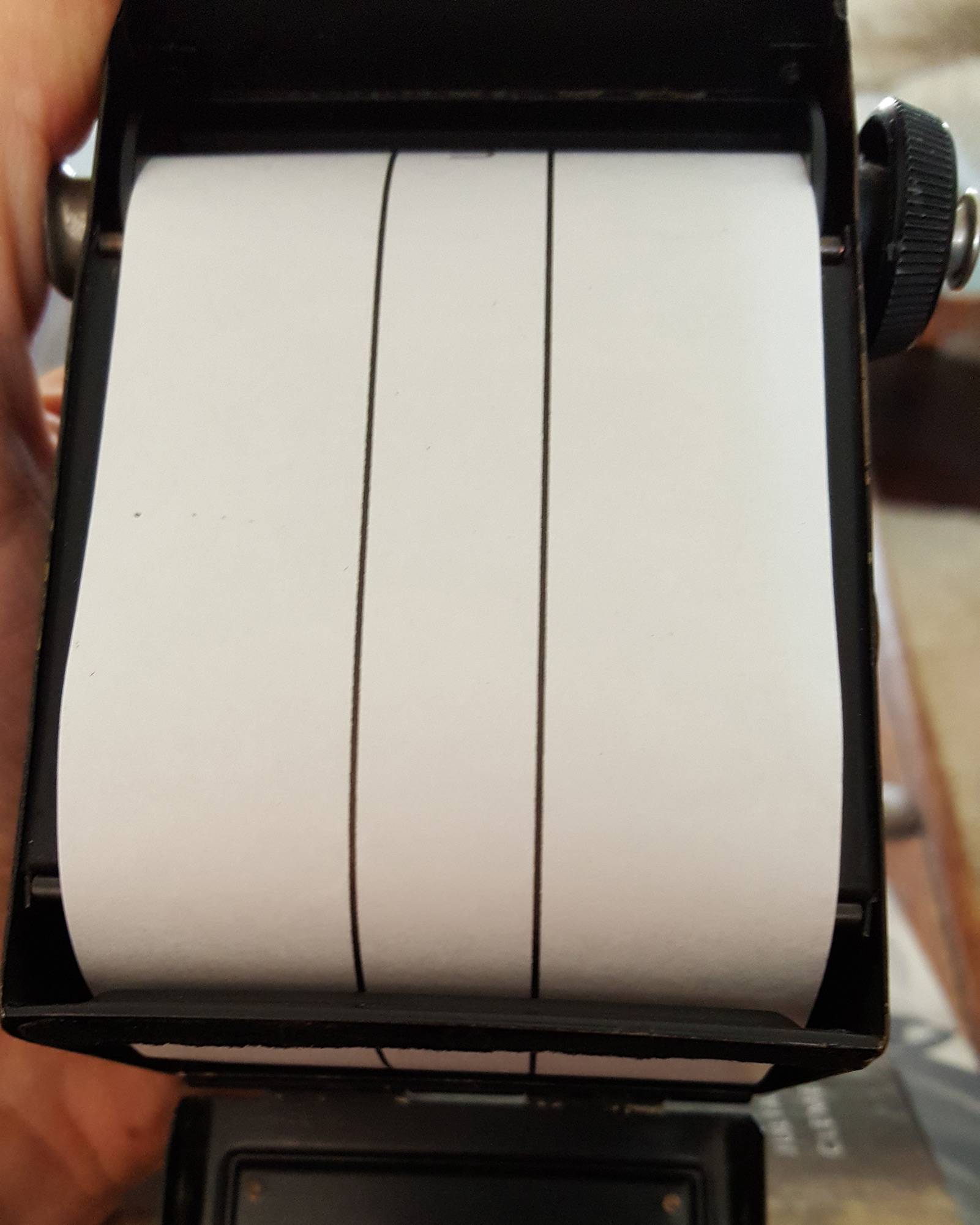 Next thread the paper leader into the empty spool and turn the winder a couple of times to check the film is loaded correctly. Make sure the film isn’t too loose by winding back any slack to the bottom spool. 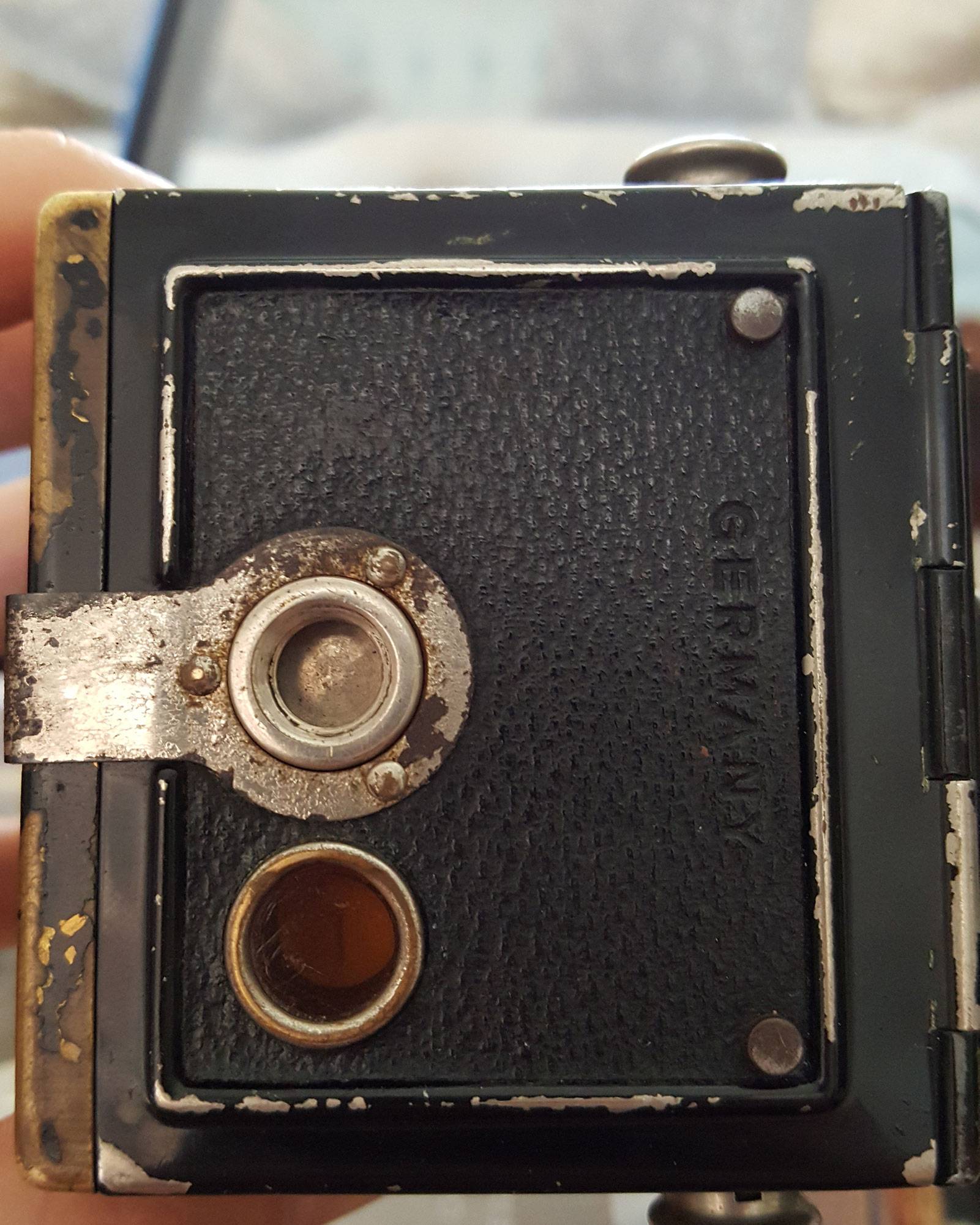 Unsurprisingly, this camera does not have a film interlock. To correctly wind on the film, you turn the winder until the number 1 appears in this window at the bottom of the camera. This camera was designed when the majority of films were insensitive to red light, so to be safe cover this window with black tape after the film is loaded. Do not use this window to count film frames. It is positioned where the numbers for the 6×9 format are marked. If you use it you will get 8 frames with very big gaps in between!!. 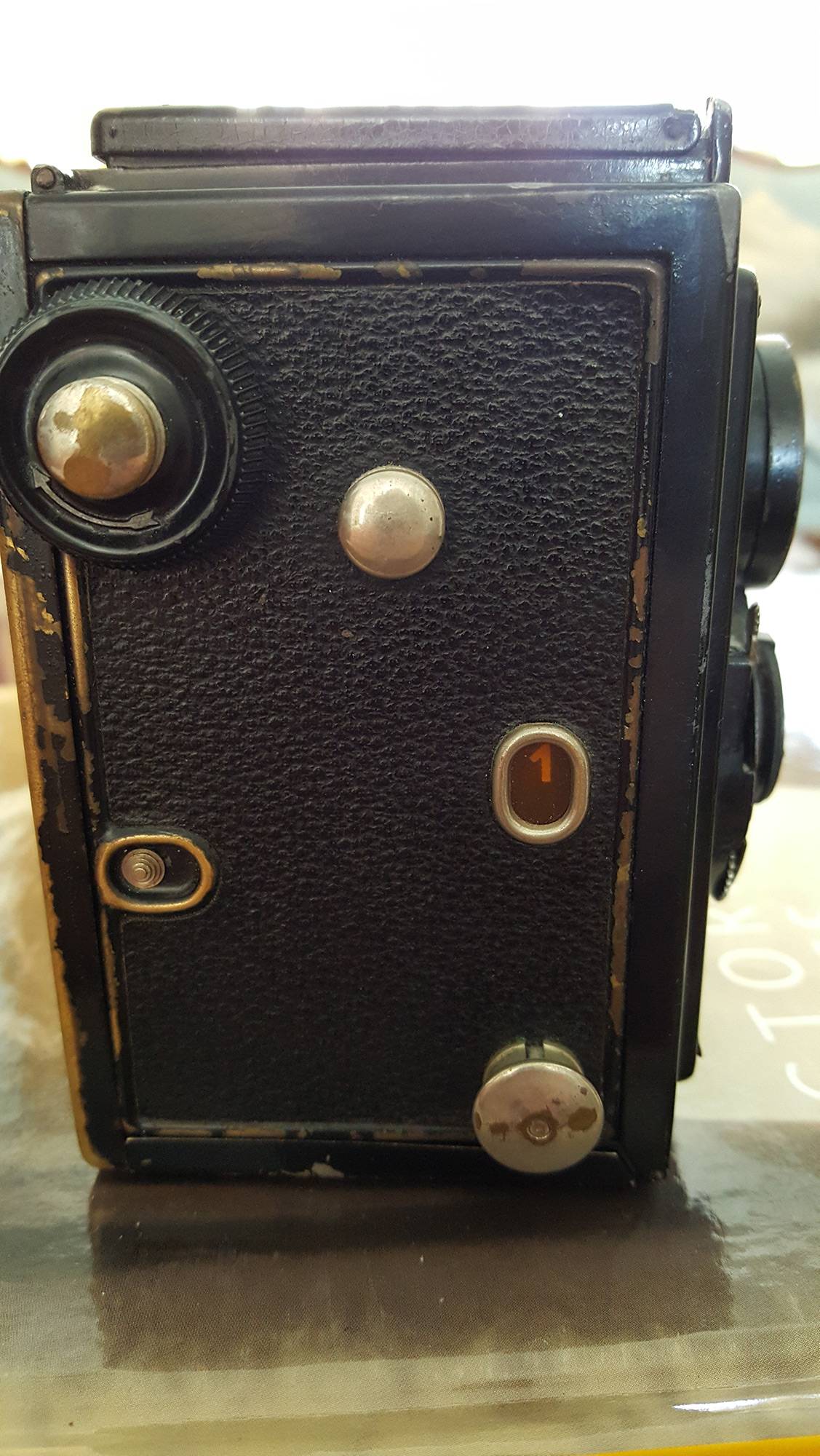 The correct frame counter is on the right hand side of the camera. After you have followed the steps above slide the tab on the left and the counter will spring back to 1. You then turn the large black knob to wind on. Remember that the shutter is not connected to the wind on mechanism. It is easy to accidently make double exposures if you don’t wind on as soon as you have taken a picture.

Shooting with The Voigtlander Brilliant.

I shot my first roll in about 20 mins. The aim was just to see how the Voigtlander Brilliant was working, and I saw no point in trying anything too ambitious. The bright weather gave me a reading of 1/50 at F16 from my light meter. I had no f16 on the camera so I had to choose between over or under exposure. I decided to over expose slightly, the accepted wisdom with negative film. The camera is easy to shoot and a lot of fun to use, similar to a scale focus compact if you are familiar with those. The only design quirk is that you can’t see where the focus is without turning the front of the camera towards you. Ideally you’d want to see some kind of focus scale on the top of the lens barrel, but this lens is tiny so that would be almost impossible.

After developing the film I saw some problems. It was obvious the images were badly overexposed. The shutter may have produced 1/50 second when it was new but judging by the negatives it certainly wasn’t now – over 80 years later. I suspect it is at least a stop slower if not more. This meant a perfect storm of cumulative errors. By erring on the side of overexposure in my metering and then unwittingly having a slow shutter I was overexposing by at least two stops. Judging by the negatives it could have been closer to three. This has an impact on both grain and sharpness. On top of that I estimate that I was hand holding the camera at around 1/20th second, so camera shake was in the mix too.

The second issue was overlapping frames. The winder is very simple and I can’t see anything wrong with it. I suspect I will just to need to be more careful in future. For future reference I am going to load a backing paper in to the camera and make a note of how many turns I need to make to ensure the frames don’t overlap in future.

It is difficult to reach any firm conclusions when the first roll of film was such an error strewn experience. By making the spur of the moment decision to set my lens to f11 instead of f22, I pretty much made the first roll an excercise in frustration.

I wish too that I had tested the shutter before loading the camera with film. I have bought a shutter speed tester for my phone and I set about seeing what the real shutter speed was. Interestingly, I found that when I first tested the shutter I was only getting 1/15th second but after exercising it quite a lot that improved to 1/35th, so hopefully a bit of use will make the shutter more accurate.  I tested the 1/25 speed, but as far as I can work out it is exactly the same as 1/50! Bulb works as normal.

I do think the Voigtlander Brilliant has the potential to be a quirky 120 shooter, and I think it is worth persevering with another roll or two to see if I can get more usable results. As with all older film cameras it going to take some experimentation and some work arounds to be able to get repeatable results.

How to Load a Large Format Film Holder.