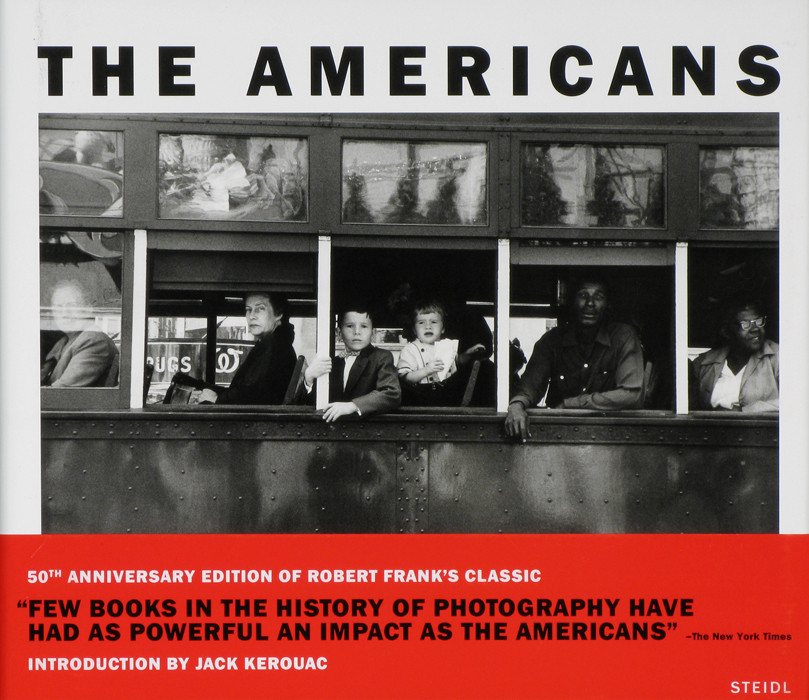 Elvis Presley might have sprung to fame as The Americans was being made, but the photographs are pure jazz.Robert Frank shoots with a bebop rhythm. His images are dissonant improvisations on the theme of 50’s America.

With the publication The Americans, Robert Frank is often credited with producing the first modern photo book. His photos flouted the then contemporary ‘rules’ of photography –  a focus on single images  staid, precise compositions and larger formats to minimise grain. It was a photo essay, but one without the traditional beginning, middle and end that photo stories in magazine publications would have. Instead here we have all the glorious spontaneity of the 35mm image. Loosely framed, grainy and immediate. Frank shot 767 rolls of 35mm film (about 27,000 images), equating to around a roll of film per day for the year and a half it took to complete the project.

“It is difficult to remember how shocking Robert Frank’s book was, He established a new iconography for contemporary America, comprised of bits of bus depots, lunch counters, strip developments, empty spaces, cars, and unknowable faces.”

Although often misunderstood or derided at the time, it’s hard not to see the DNA of The Americans in much of the street photography that followed.

One thing that is hard to do when looking at a book of  photographs over fifty years old, is not look at them as a piece of nostalgia. Modern digital filters are often used to link images to the past. Frank’s work was shockingly modern when published, but it is almost impossible to see them that way now. Grainy black and white reportage is in large part a dying art and and if it is used it is often to connect to the past rather than look to the future. It important to remember that nothing nostalgic or sentimental was intended  in Frank’s work.

I have owned my copy of the Americans since 1995, and it has survived on my bookshelf long after many other books were consigned to storage in the attic. In an age when a lot of photography presents a very straight forward and unambiguous point of view, Frank’s work is compelling because it so broad and diverse. Bikers in leathers and the shining chrome of 50’s Americana share space with men in top hats who could have been photographed decades earlier. These  images are despatches from the road, and one always gets a sense that it feels that Frank is always passing through each scene. If it is a quest, then it is one without a conclusion. If he lingers it is only for a moment and a few clicks of the shutter, and then he moves on.