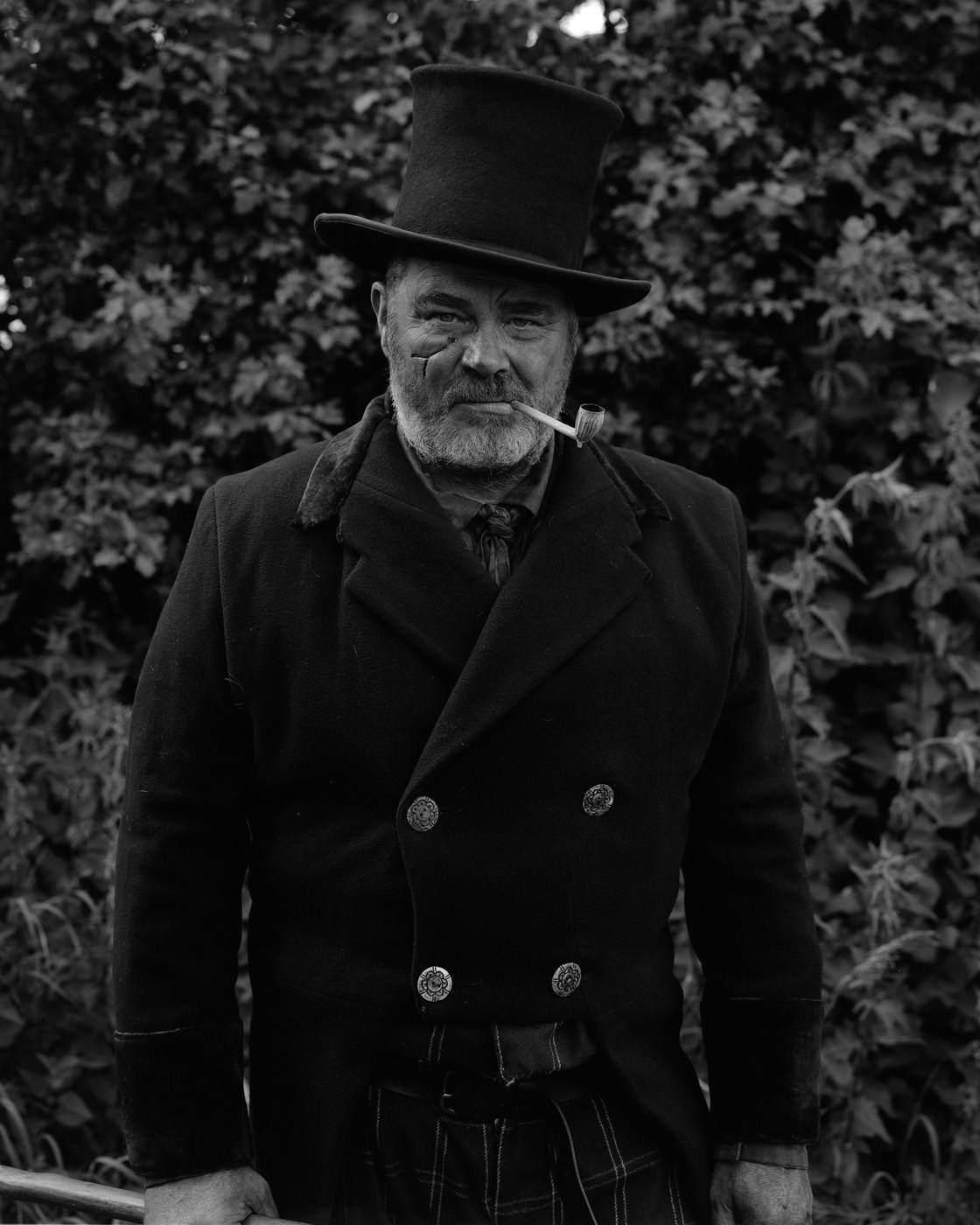 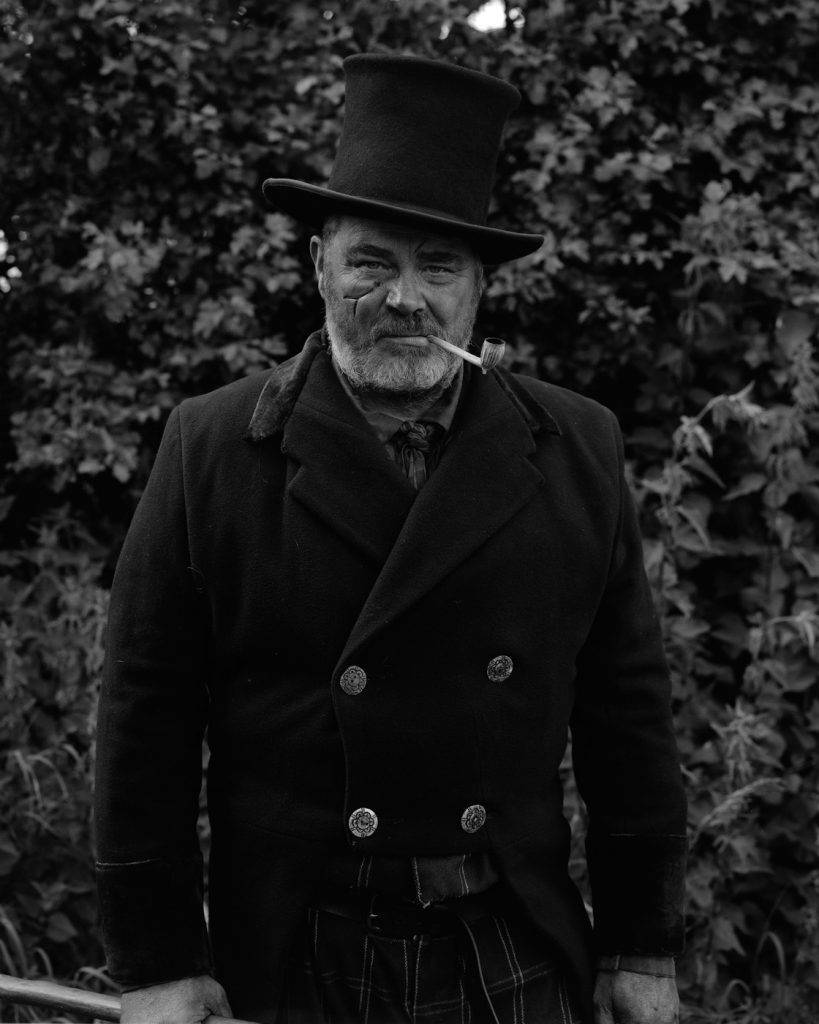 I have been shooting large format portraits in my personal work for the last five years.

This is partly for aesthetic reasons, and partly to give myself a break from digital photography when I am shooting for fun. That is not to say that I apprieciate what digital can offer. I do, but using a view camera is very different. It gives me a new challenge, and a new perspective in how to approach the portrait.

Many photographers are intimidated by the idea of shooting film and the thought of using such a large and archaic camera. In reality, a view camera is a very simple device. There is genuinely nothing complicated about it, it is just a very well made box!

Each step in setting up the camera is simple. But there are quite a few steps and forgetting one usually wastes a sheet of film.

If you know your basics, and understand the camera’s strengths and limitations, large format photography straightforward, if not simple. Like any camera, there are only three essential controls, aperture, shutter speed and focus. For portraits, the only movements you really need are front rise and fall, and these are only to help composition. I shoot with a monorail camera and tripod weighing close to 6kg, and it is just not practical to compose using the tripod head. It is much easier to set the tripod straight and level and use camera movements to fine tune your composition.

What catches the novice out is not the difficulty of any particular step. Each step is easy. It is missing any of these simple steps out that often leads to a wasted sheet of film. 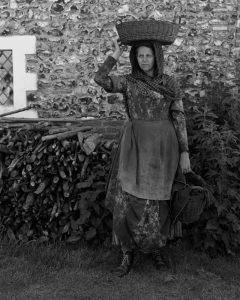 Walking around a 40 acre site like the Weald and Downland Museum with a large format camera takes a certain degree of planning.

It was July when I got a press pass to shoot at The Weald and Downland Museum’s Living History Festival . I regularly shoot commercial photography for the museum, so I already had a good relationship with them. It also meant I knew where everything was and how to get there without having to wander around too aimlessly. One of the first questions you ask yourself when shooting large format is “How am I going to get all my heavy camera gear to where it needs to be to take pictures? Preferably without hurting my back or having a heart attack”.

Getting from place to place

Working in a large open air museum is a challenge. The buildings are spread out over a 40 acre site, and most of it is hilly. Thousands of people go there at the weekend so you can find yourself parked a good few minutes walk from the museum proper. It is not so straightforward to nip back for a lens or extra film holders. 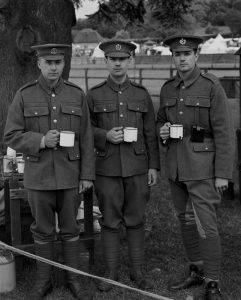 Set up and Gear

I prefer to set up my camera up from the boot of my car, attach it to a tripod and walk around with it like that. I pad one shoulder with my dark cloth so the tripod doesn’t dig in to my skin. Then I  hang my camera bag on the other shoulder. A back pack would probably distribute the weight better, but I do need easy access to my holders. My camera is a Toyo-View 45C monorail. It is more portable than a lot of rail cameras, but not exactly a featherweight. A field camera would be a lot lighter, but most lack the bellows extension I need for shooting close with my longer lenses. A monorail is also nicer to shoot with once it is set up. Mine has geared movements, and is very stable and precise.

I decided to stick with one lens, my Schneider 210mm APO Symmar. Not only is it my most used lens, it is also a spectacular performer in all condtions. I can honestly say I didn’t realise how good lenses could be until I got this one.

One of the essential skills of large format photography is knowing what to leave out of the accessories bag. I decided to stick with one lens, a loupe, and a light meter so that I could pack in as many film holders as I could.

I packed 15 holders in my bag, enough for 30 shots. The plan was to take two pictures of every subject I chose. Normally, I work in a way that I direct people until I think I have the shot I want, and expose one sheet of film. I then shoot another sheet which is usually a close duplicate of the first shot. When it comes to processing I split the two sheets into different batches for development. That way if there is some problem with exposure or a user error in the development process, I know that I have a back up of the image. Of course this does mean you have to label all your holders and keep notes. However, it does cut down the risk of disaster.

Approaching strangers to take their picture is something that a lot of photographers dread.

The great thing about using a large format camera is that it is a good conversation piece. People often seek me out to talk about the camera. If I ask to take someone’s photo, they are usually happy to pose for me.

After a hard day shooting,  it was interesting to meet another photographer at the end of the day and compare notes. He was telling me how hard it was for him to get people to pose for him, and how disinterested they were with the process, he was using a Nikon DSLR and profoto flash.

I had totally the opposite experience, the re-enactors were very interested in the camera and the whole process. They wanted to know how it all worked and the fact the method was so close to how a Victorian might have taken their picture had huge appeal. I had as many subjects as I could handle. After photographing each person I exchanged details, and made sure everyone got a photo in the next couple of weeks. I think this is a really important thing to do and helps keep people open to other photographers taking their picture.

Routine is everything when shooting large format portraits.

It is important to make the portrait making process as easy as possible for your sitter. I prepared by setting up my camera as much as could beforehand. So I set my exposure and zeroed the camera’s tilts and shifts. I also made sure that the camera focussed to about 10ft.  Even mostly set up, the camera is still slow to shoot, so a mastery of small talk is often a necessity.

Once I have everything set up, I get my subject to pose by standing next to them and getting them to mirror what I do. I then go back to the camera and I get my subject to look at the camera instead of me -you can’t look through a view camera once the film is inserted and people will instinctively look at me rather than the lens. I have found you have to be quite vocal when shooting portrits this way. You can’t shoot a lot of shots hoping that some magic will happen. You have to make the magic, then take the shot. Suprisingly, now that I am used to it, I prefer not looking through a camera when I am taking someone’s picture. It is easier to look directly at someone and really increases your connection with them. Different methods yield different results, and that’s exciting.

I would recommend large format photography to anyone. I have learned so much shooting this way and much of it is applicable to other formats. Changing your camera can often change your photographs, and there is no bigger change than a view camera.

I am a professional photographer based in Chichester, West Sussex, England.

See more of my Commercial Photography