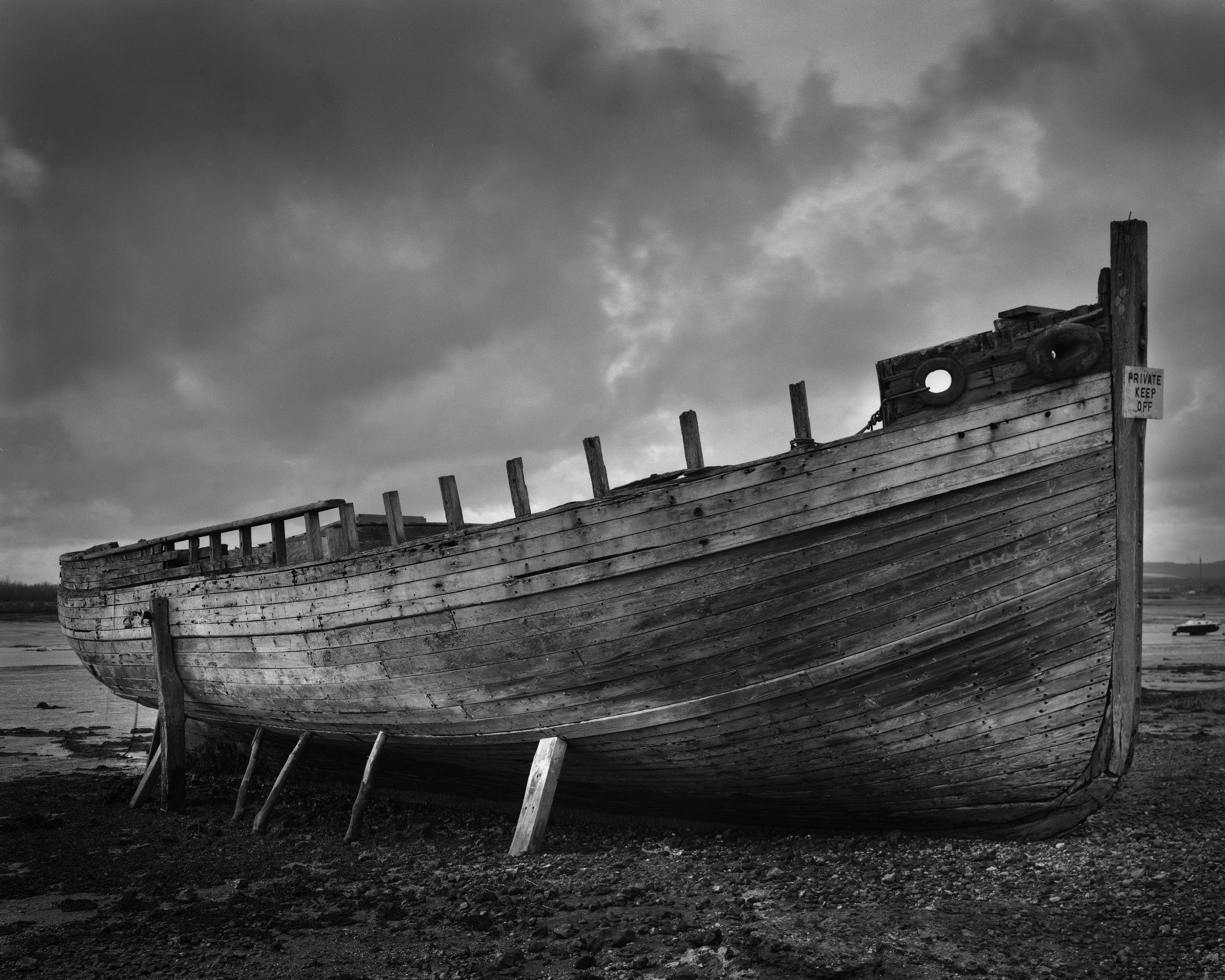 Film: Ilford FP4 plus rated normally at ISO 125 and developed in Ilford DD-X

Exposure: Spot meter. I metered off the shadow area of the hull and set that as a zone 3 (closed my aperture down two stops from the reading). Exposure was 1 second at F32.

I had scouted out this location earlier in the year and decided to wait for the right combination of weather, time of day and tide. I took this about 20 mins before sunset on a day with broken cloud. Low tide is about half hour away.

One very important factor in the success of the shot was that there wasn’t too much wind. Wind is often the biggest problem you face when shooting on the coast. Not only because of camera vibration or blur, but also because wind blown sand can get into everything and there is no more adept destroyer of cameras and lenses. If you work from a back pack that needs to be laid on the ground to access it, you need to be especially careful of this. Even though this was a relatively still day, if you look at the stern of the boat you can see ropes blurred by the long exposure. An orange filter brought out the contrast in the clouds without it looking false.

I set up my my view camera with about 1cm of rise to keep perspective natural. I also used little swing on the front standard to ensure the boat was tack sharp from bow to stern. Even so I had to stop down to F32 to keep the foreground sharp. The 125mm lens is equivalent to roughly 35mm in full frame. There is some subtle wide angle drawing of the subject but nothing too obvious. This tiny lens is fantastic little performer.

I developed the film in DD-X diluted 1+9 for 15mins 45 seconds. It was scanned by stitching 6 exposures made with a DSLR and a light table.

The final image had some dust spotting and dodging and burning in Photoshop. Nothing that you couldn’t have done in a traditional darkroom.

I hadn’t used FP4 in a while but I must say it really worked a treat with this shot. It has a bit of extra punch compared to HP5 that really brought out the texture in the wooden boat.

Portraits on the Beach with a Large Format Camera